Our project is established but our site is new and although we have weddings specialists in over 60 countries it’s going to take time to get everyone on the ship. If you can’t find exactly what you want please get in touch and if you are an awesome wedding specialist or you know people you want to recommend let us know.

I pottered around the room in my beautiful gown, tidying away clothes, shoes and socks and just trying to find something for my hands to do to stop them shaking. Alex ran around trying to find an internet connection to tell you all what was going on, also trying to calm himself for the wedding in Cusco, Peru

There was a quiet knock at the door and in walked Luis with Carlos. Luis was giggling and excited and had come to explain how the ceremony would work to us. Carlos did not speak English and as we had little Spanish, Luis wanted to explain the order of the ceremony before hand so we knew when to sit, what would be asked of us and when to stand.

Once the explanation was done I was even more nervous but it was almost time. Carlos went before us and Luis took us to the front of the hotel. We had to enter the garden from different directions and come together at the table. I was led one way and Alex the other. We awaited our signals to go…and the music and the ceremony began. 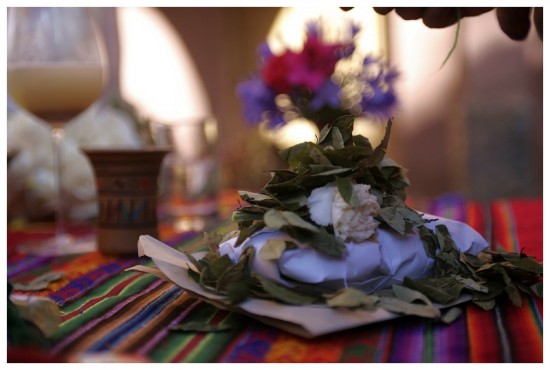 I walked around the side of Luna Rumi and as I entered the garden I saw Alex approaching opposite me. Although we had been apart for mere seconds I was overwhelmed with happiness at having him back by my side again. We met in front of the table to the sound of traditional pipe music and drums being played at the side of us and waited for Carlos to indicate for us to sit.

As we don’t understand much Spanish the words, for us, were not integral to the spirituality of the ceremony so I will explain the actions themselves and how they made us feel. It was so intense that I will have probably messed up the order of the proceedings but for us it is the feelings that the ceremony invoked from the actions that matter more than the order.

We sat and listened to Carlos speaking in a soft musical chant as he addressed us and the items in front of us on the table. The small fire burned beside him on the floor and two glasses and a small cup were in front of us on a brightly coloured cloth. One glass held a dark wine and the other chicha (which is a popular fermented corn drink made by the barrel in homes all over town. You take your empty soda bottle and have it filled at one of the houses.) As Carlos spoke he poured some of the wine into the cup and onto the floor around us. To our left and to our right and then repeated the same with the Chicha.

We presumed this was to bless the ground and as an offering to Pachamama, Mother Earth. Carlos finished this particular prayer and then swept our bodies clean using a bunch of herbs like a brush, he swept from our hearts out to our finger tips and down to our toes, ridding our bodies, and then our minds of any ill spirits. The smoke was passed over us to complete the cleansing and the blessing began.

Carlos poured a splash of scented oil into our palms and asked us to rub our hands together and to inhale the scent, we obeyed and the rush of the intense smell filled us both with almost heightened awareness of our senses. Music played all around us, smells filled our nostrils and minds and the smoke drifted past our eyes.

As the feeling sunk in we sat back down and watched, listened and absorbed as Carlos prepared our offering to Pachamama. He laid out a clean white cloth and started to unfold tiny parcels that were wrapped in paper covered in fast paced curly writing. As Carlos unwrapped each item he placed it carefully, never silent, always praying, onto the cloth in front of us. My eyes filled with tears as I watched the offering take shape in front of us. 2 small figures, a man and a woman simply shaped in biscuit (I think) were the lower centre of the page. Around ‘us’ so many things were added. Corn, thread, beads, buttons, colourful sugared sweets, silver and gold leaf, seeds and charms, rice and beans…so much and all with its own meaning and blessing.

The music continued as Carlos finished adding treasures to the cloth. He ever so carefully wrapped the offerings together into the crisp white linen and then placed it inside a more beautifully decorated cloth with brightly coloured tassles on each corner so that we could hold it with ease. As the parcel sat on the table wrapped in love, prayer and hope, Carlos asked us to give one another an offering. I was to offer Alex coca leaves in representation of the strength, intelligence and what he needed to bring to our marriage and then Alex offered me corn to represent fertility and the ability to provide for our family, friends and all of those around us. We were offered and drank a mouth full of chicha each and passed the rest to Carlos for him to drink too. It was such an emotional moment and filled with so much meaning I fought back the tears and Alex insists it was the sun in his eyes that was making them a little glassy!

The oils we had previously had poured into our hands was then poured onto our heads which trickled down our necks (onto Alex’s freshly shaved skin…he told me of the inner squeak after the ceremony) and then tiny yellow petals scattered over it also on top of our heads.

We held each others (sweaty) hands all the way through the ceremony and as petals rained down from our heads our hands were tied with ribbon to represent our unity and to signify our marriage.

Our offering on the table was covered with rose petals and coca leaves and handed to us. We held out our tied hands, palms up and took it carefully over to a hole that had been dug into Luna Rumi’s ground near a rose bush. Here was were we placed our offering to Pachamama. We covered it with yet more rose petals, coca leaves and the tiny yellow petals fell from our heads onto the parcel as we poured the remaining chicha and wine in around the offering.
Carlos finished his prayers and covered the offering with the dirt from the hole and we could finally kiss! Everyone; Fernando, Patricia, Roxana, Freddy, Luis, Julio and more, they all whooped and cheered and the music played louder as we were told we now had to dance! Dancing is not a strong point of ours and with our arms tied together to the elbow it couldn’t have been more awkward but it was still a special moment. The moment we could finally take the time to look into each others eyes and silently tell each other how much we love one another. 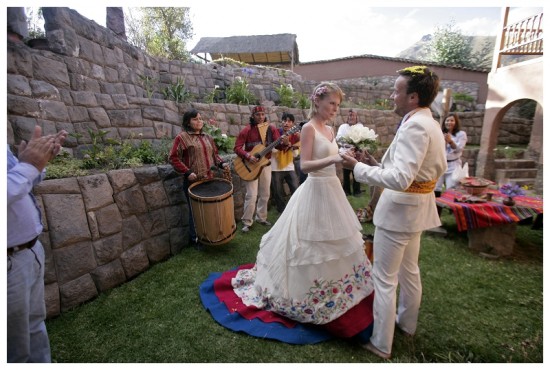 We laughed away the tears and hugged and thanked everyone for being a part of our very special day. Freddy bought us a copy of the CD of the music that had been played live for us at the ceremony and we were about ready to collapse when the film crew asked us to say a few words for the TV. They handed Luis the microphone so he could ask us a few questions and that was it. The first question he asked I burst into tears. Tears of emotion, gratitude and just overwhelming love for Alex and the whole team that had made that day possible! I think Luis was close to joining me but he did well and held it back. Once the interview was over we all went to eat! We were all worn out, excited and definitely hungry so we all sat together and enjoyed the aftermath of the ceremony.

None of the team had ever seen a traditional Andean ceremony and I think they had all enjoyed it as much as we had. Freddy was blown away by it and asked Carlos all about its meaning, how old the tradition was and anything else he could think of! Alex and I were completely on cloud 9 and just soaked up the atmosphere around us! Our friends had created such a special day for us and we were trying to think of the words to thank them. We choked out a few words of thanks and cut the beautiful soft white iced cake, smeared a little on each others face and at that point I had to change out of my dress!
Luna Rumi had offered us a room for the night and once we had eaten we said our farewells we went to our lovely room and collapsed onto the huge soft bed.
Luis asked Carlos how he felt about our marriage that day and being a part of our adventure,

“The marriage of Lisa and Alex, was for me a sense of spiritual encounter, I truly felt that among them there is a deep bond of mutual understanding and protection between the one and the other, I was very pleased they have been married in the Andean rite”.

For Carlos to deduce this from only seeing the emotions crossing our faces during the ceremony and the meal, we really feel he understood us and our journey; our exploration of his culture and he gave us his personal blessing for which we are truly thankful. It was such an incredible wedding in Cusco, Peru.

Get more information on how to get married in Peru

If you are looking for help with for your wedding in Peru come and check out our hand picked collection of wedding specialists in Peru and get in touch.